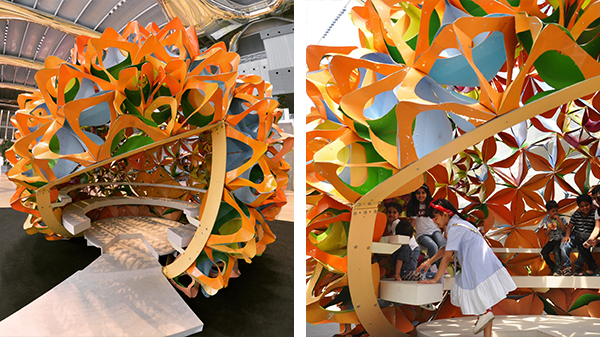 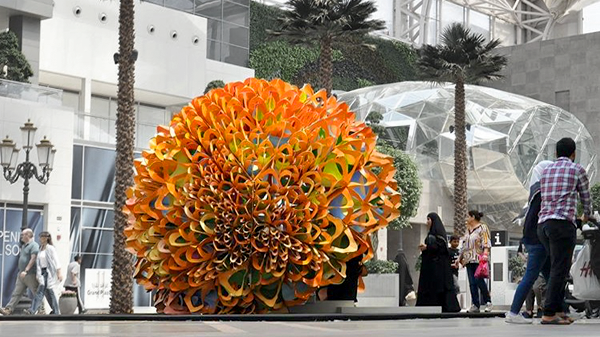 August 2018
Kuwait Visiting School 2018: ‘Filtered Space’
Urban Systems staff have co-directed and tutored in the 2018 edition of the Kuwait AA Visiting School. The workshop produced an intricate architectural pavilion that was on display at The Promenade, the largest and busiest mall in Kuwait. The pavilion showcases digital design and fabrication strategies for incorporating site specific information into architecture – with a complex skin directly informed by the light levels of the surroundings. 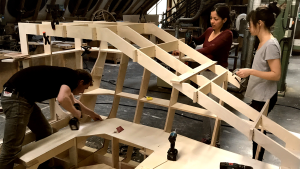 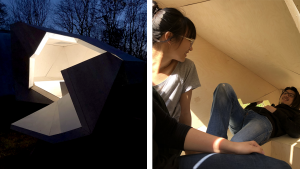 April 2018
MakeLab 2018: ‘Off-the-Grid living’
Urban Systems staff have directed and tutored in the 2018 edition of the AA MakeLab Visiting School. The workshop investigated the notion of ‘nomadic living’, discussing social, economic and technological changes that impact housing. The design and build challenge addressed performative aspects such as the filtering of light, views and privacy applicable to architectural envelopes.

Dec 2017
Final Reviews in Hong Kong
Jeroen van Ameijde was invited as a external reviewer at the Chinese University of Hong Kong. The visit was by invitation of the Director Professor Nelson Chen and Assistant Professor Kristof Crolla at the School of Architecture. 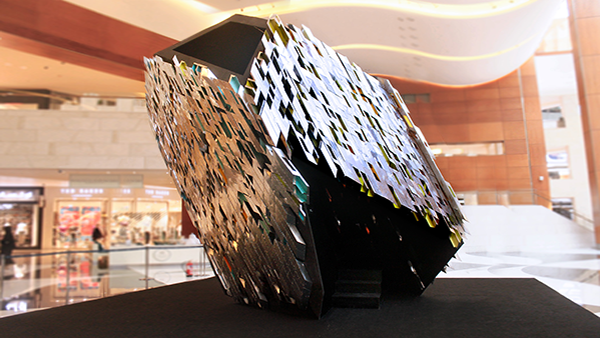 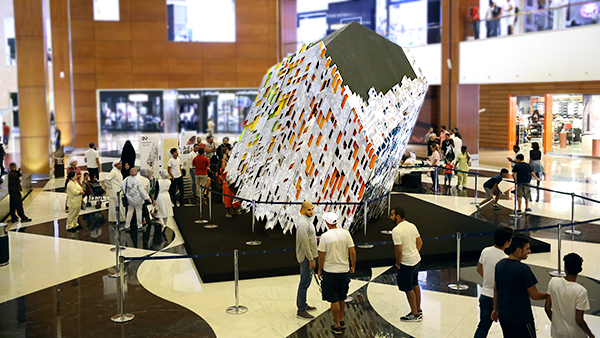 August 2017
‘PixelSpace’ Pavilion in Kuwait
A pavilion titled ‘PixelSpace’ was showcased in Kuwait as part of a international workshop organised by the Architectural Association and supported by Tamdeen Group and Golf Consult in Kuwait. The pavilion incorporates a new approach towards the construction of digitally designed architecture, using a system of discrete material components with integrated functionalities.

May 2017
Visiting Lecture and Final Reviews in Cairo
Jeroen van Ameijde was invited as a visiting critic and guest lecturer at the German University of Cairo. The visit was by invitation of Dr. Wafaa Nadim of the Architecture and Urban Design department, and the studio titled ‘Generative Housing, From Interpretation to Realisation’, with student work investigating new models for high-density community housing in the context of Cairo’s informal settlements.

March 2017
Visiting Lectures in Kuwait, Doha, Sharjah
Jeroen van Ameijde has given several lectures in Kuwait and surrounding region including at the University of Kuwait, Promenade Cultural Centre in Kuwait, Virginia Commonwealth University in Qatar, University of Qatar, and the American Univerity of Sharjah. The lectures presented a range of academic work and architectural projects, developed by Jeroen van Ameijde and Sulaiman Alothman as part of their academic research and professional collaborations. The upcoming AA Visiting School Kuwait will be held from 7-19 August 2017 and is open to students of all levels. 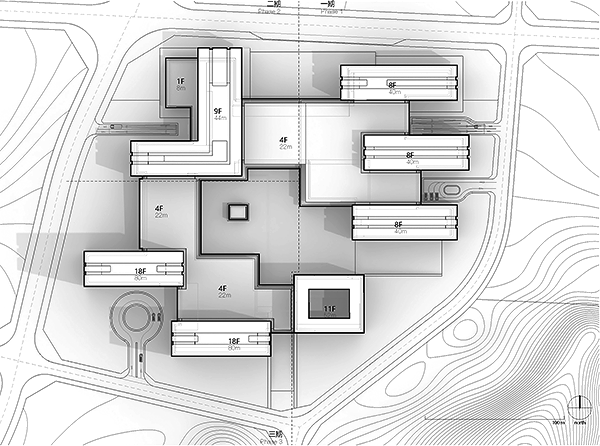 January 2017
Happy New Year!
2016 has been a busy year with a period of hard work on a very complex hospital project in Sichuan Province. For 2017, we wish everyone a strong year full of architectural achievements, and a very Happy New Year with everything else that life has to offer! 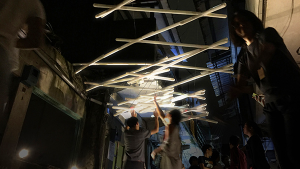 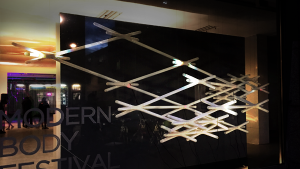 November 2016
‘FLOW’ Interactive Installation in Taipei and The Hague
As part of an ongoing academic research agenda, Jeroen van Ameijde was invited to contribute to the Modern Body Festival and Space Media Festival organised by DEZACT and Stichting Modulus. ‘Flow’ was an installation conceived in collaboration with artist Luis Rodil-Fernández, materialising people movements into a modular installation with embedded sensors and lighting. [more info]

August 2016
New project: Women’s and Childrens Hospital in Sichuan Province
Urban Systems is commissioned to develop a concept design for a new 400 bed hospital complex, which could in later phases be extended to a 2000 bed comprehensive hospital campus. Currently in the initial planning phase, Urban Systems is developing studies for the overall masterplanning, internal circulation and logistics of the complex.

June 2016
Upcoming Lectures
Brendon Carlin will lecture in Ho Chi Minh city this summer during the ‘Tropicality’ Visiting School in August 2016. Jeroen van Ameijde will lecture in Chengdu in July, Kuwait City in August and will take part in the ‘Space Media Festival’ in Taipei in August, an international event combining installations, screenings, performances and lectures. [Taipei Space Media Festival] [Kuwait VS] [Tropicality] 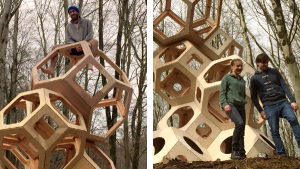 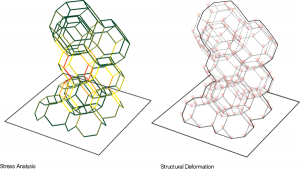 April 2016
MakeLab 2016: Digital // Physical Growth
Urban Systems staff have directed and tutored in the 2016 edition of the AA MakeLab Visiting School at Hooke Park in Dorset, Uk. The project investigated the use of specific site related information to ‘grow’ the design of an architectural structure within the computational and physical environment to construct a 4.5 meter tower. The structure was designed and built in four days by a small group of international students and staff, using local timber and CNC fabricated birch plywood components. 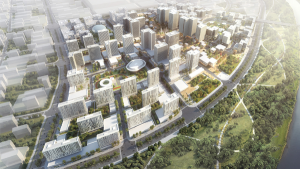 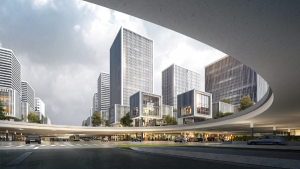 March 2016
Changsha International Communication District
Urban Systems has delivered the initial research and conceptual design for the Changsha International Communication District, located in Changsha, Hunan, China. The site area of approximately 1,000,000 m2 is part of the new ‘Wuguang High Speed Rail New City’, located to the east of the existing Changsha metropolitan area, and will accommodate clusters of offices and organizations for international affairs, along with the supporting programs such as residential buildings, retail, education, healthcare and culture/leisure facilities.

January 2016
New Masterplanning Project in Changsha
After being selected as a finalist in the international competition for the ‘Changsha Center’ in 2014, Urban Systems is now working on the research and development of a conceptual urban design for the ‘Changsha International Communication District’, as part of the new Changsha High Speed Rail City masterplan.

Working in collaboration with local government, Urban Systems is developing a fully adaptable, data-driven design model that incorporates detailed requirements for a vibrant and sustainable mix of economic and cultural programs, connected through a multi-layered system of pedestrian circulation pathways and event spaces.

November 2015
Visiting Lectures in China
Jeroen van Ameijde and Brendon Carlin were invited to lecture at the Hunan University of Technology in Changsha, as well as at Henan University in Kaifeng. The lecture was titled ‘Deep Planning’ and covered academic and professional work developed during the last eight years at the Architectural Association in London and at Urban Systems. The lecture showcased a range of student work, 1:1 installations and professional projects, developed through innovative generative design processes and aimed at addressing new and emergent urban conditions in China and other fast growing cities around the world.

August 2015
AA Visiting School Chengdu
Jeroen van Ameijde was invited as a workshop tutor at the AA Visiting School in Chengdu. The programme was coordinated by Stewart Dodd and co-taught with Kristin Cross, Jason Griffiths and Kyle Chou. During the workshop, Jeroen also gave a lecture hosted at iBox creative hub in Chengdu.

June/July 2015
New large scale residential project
Urban Systems have been working hard on the conceptual designs for a new large scale housing development in Henan province, China. The project comprises of 24 high-rise towers, underground parking and clubhouse facilities. The project also integrates retail and a large daycare centre for use by the residents of the project and surrounding area. 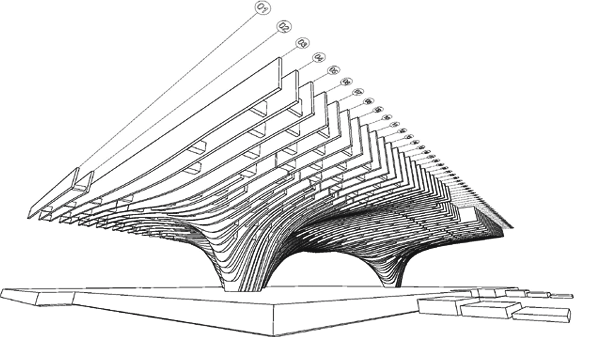 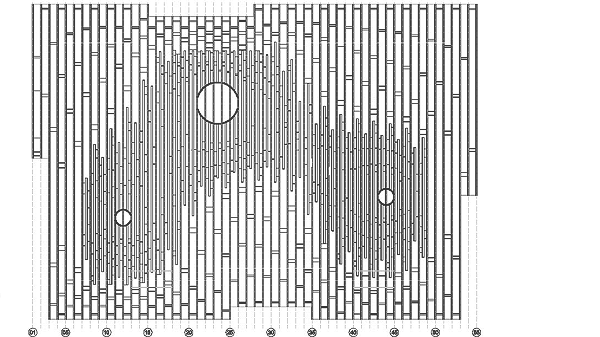 June 2015
Enrolment centre for Honliv School in Changyuan
Our new ‘enrolment centre’ project has now entered the design development phase. The 400 m2 pavilion will be used as exhibition gallery, student registration centre and for public events. The differentiated performative roof filters light in different ways, varying the socio-psycholigical conditions within the space to create areas for public and more private activities without comprosing the flexibility of the open plan.

May 2015
Urban Systems receives Honourable Mention at ‘THECITYPLAN AWARD’
THE PLAN, the renowned architectural magazine from Italy has announced its annual ‘THE PLAN’ awards. Urban Systems was nominated in the category ‘Urban Planning’ with the project ‘Changyuan CBD Masterplan’.
[THE CITYPLAN AWARD] 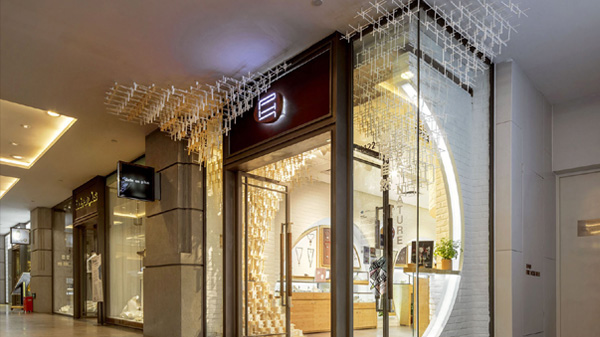 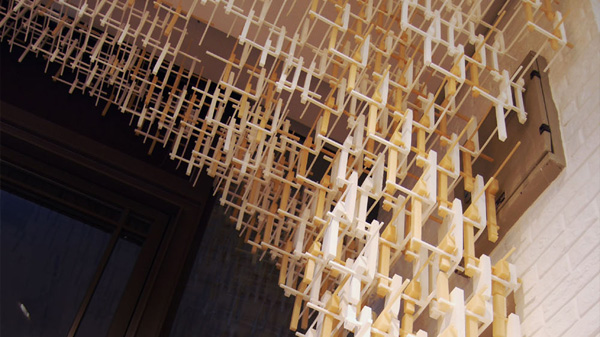 April 2015
‘Urban Nature’ at RIBA Windows 2015 Shanghai
As part of the RIBA Windows project currently on display in the Xintiandi district of Shanghai, Urban Systems Office and jewelry brand PH7 have created an installation that references complex systems in nature. The installation is fabricated using low-cost and 3D-printing technologies, and was designed through a customised digital design process. 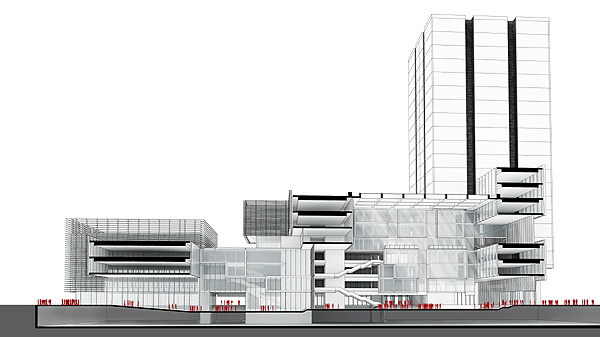 March 2015
New project: Medical University concept design
Urban Systems is commissioned to develop a concept design for a new Medical University building, to be located at an existing private hospital campus in China. The project will incorporate academic programs for around 800 students, a separate research centre, and housing for students and staff. 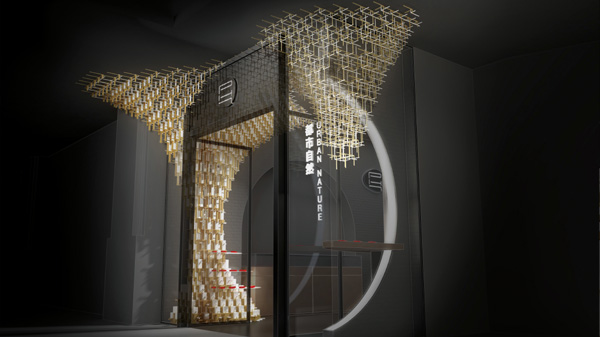 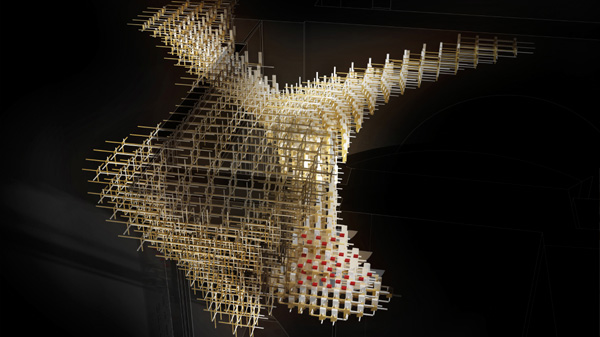 February 2015
Architects for RIBA Windows 2015 Shanghai announced
The RIBA have announced the line-up for their third Windows project in Shanghai. Urban Systems is part of the selection of ten UK practices asked to design temporary installations for the Xintiandi retail area in Shanghai.
The projects will be unveiled on 2 April 2015 coinciding with the Shanghai fashion week.
Information about the project is published on the website of the RIBA, and covered in Architects Journal, Retail Focus, and Building Design.

Feb 2015
AA Visiting School Sydney
Brendon Carlin was invited as a workshop tutor at the AA Visiting School in Sydney. The programme was coordinated by Jeffrey Turko. During the workshop, Brendon also gave a lecture hosted by The University of Technology Sydney.
[programme website]

Nov 2014
RIBA Architects visit to Shanghai
As part of the upcoming RIBA Shanghai Windows project 2015, representatives of 10 invited UK architecture practices have visited Shanghai. The project offers the UK Architects to take over the retail windows in Shanghai’s Xintiandi shopping plaza during Shanghai Fashion Week. Urban Systems will work together with the Chinese jewerly brand PH7 to create an installation that integrates concepts of jewelry, architecture, and natural systems. 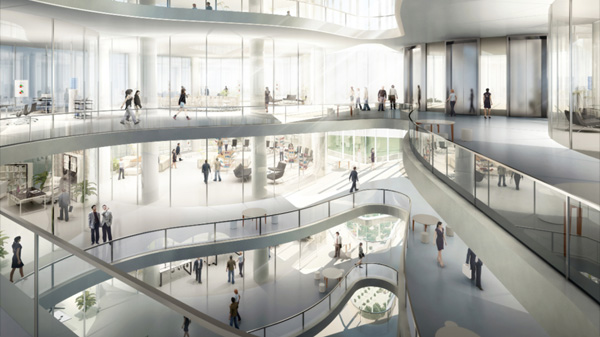 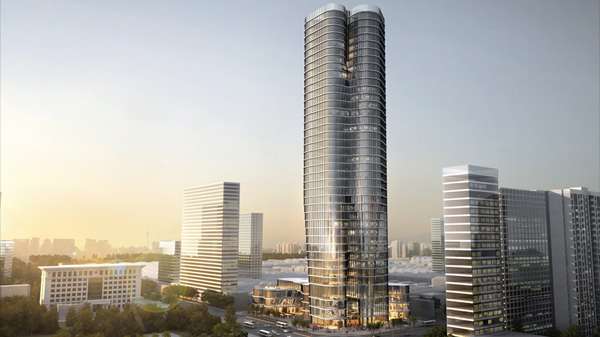 October 2014
New project – office tower and branch for Bank of China
Urban Systems received a new commission for the design of a 114,000 m² mixed-use scheme, that will include a Bank of China Branch, offices, retail including a hypermarket, cinema, restaurants, and a conference centre.
The concept scheme was presented during a client visit to the London office and is currently going through further development stages.

July 2014
EXTRA FABRICA Symposium and Workshop – Taipei
Jeroen van Ameijde was invited as a lecturer and invited critic for the EXTRA FABRICA symposium and workshop organised in Taipei. The events were organised by DEZACT and hosted by Shih Chien University in Taipei from 28 June to 7 July 2014.
[DEZACT] 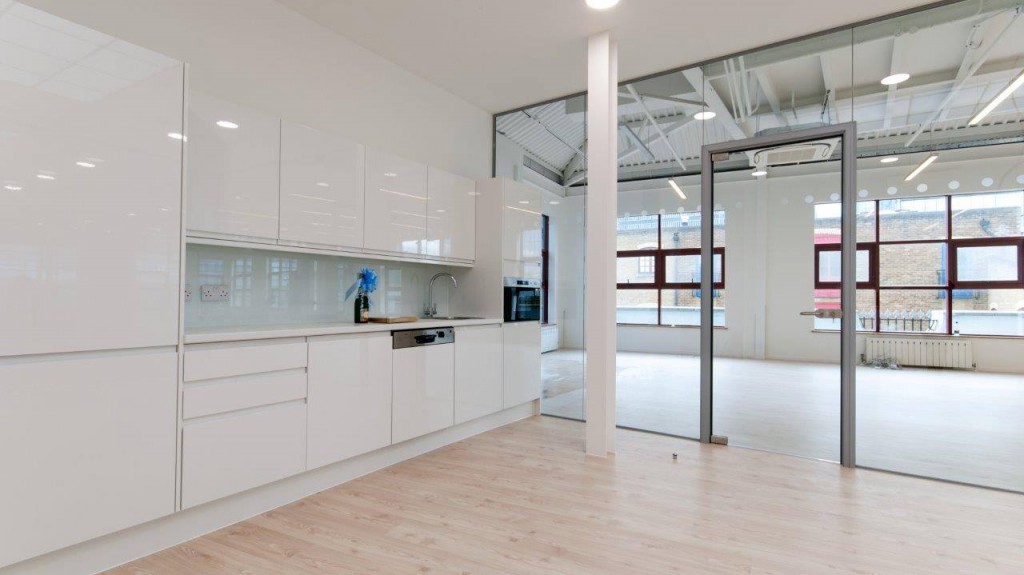 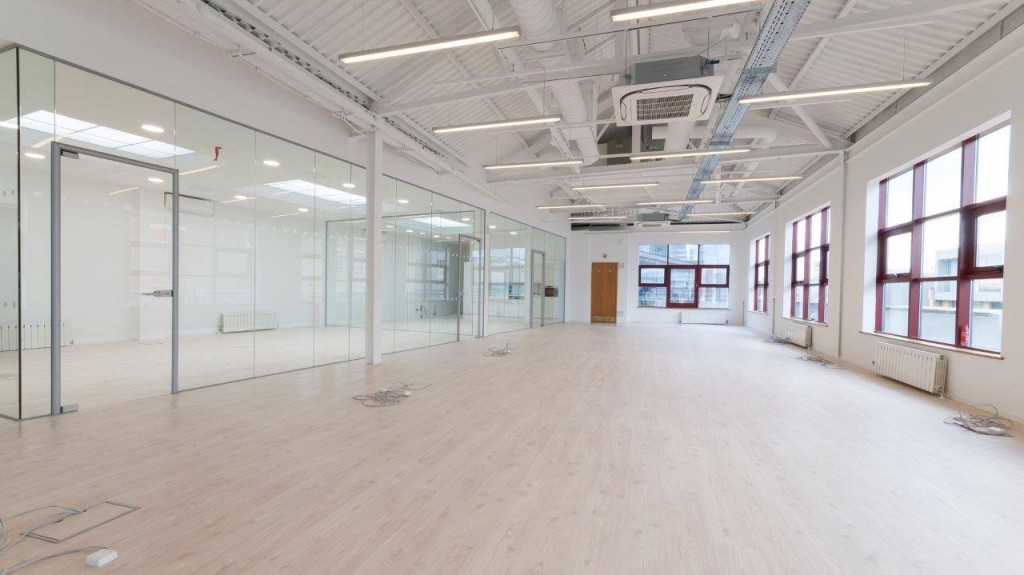 June 2014
New Office Space in Southwark
Urban Systems moved into the office space Shand House. The open plan office area can house up to 50 staff and is combined with a meeting room, kitchen, modelmaking and printer rooms. The refurbishment was completed in five weeks and included removing the ceiling, rebuilding the bathrooms and installing new flooring, new AC and electricity networks.

May 2014
Office Refurbishment in Southwark
Urban Systems’ new office space is taking shape in Shand House, Southwark. The interior fitout is designed by Urban Systems and developed and realised in collaboration with CSK Projects London.

February 2014
Invited Competition Changsha
Urban Systems is invited to participate in a competition for a landmark mixed-use commercial project in Changsha, Hunan Province China. The project includes a landmark iconic tower of 400 meters, hotel, serviced apartments, retail and a conference center. Other participating offices in the competition include SOM, Aedas, Atkins and BIAD.